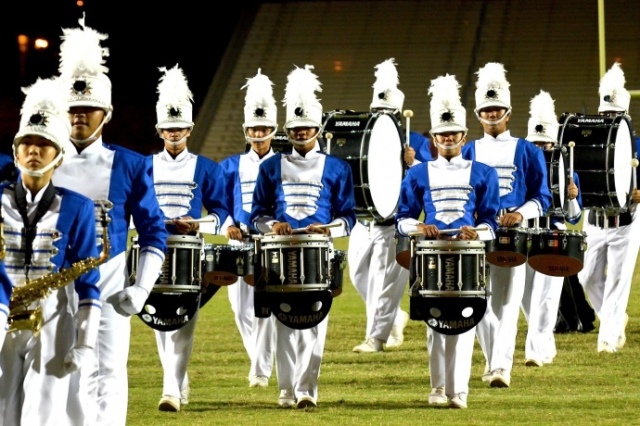 This week seems to be somewhat prophetic for marching bands this upcoming season.

Monday, I finished breakfast on the deck and moved inside to write in my study.

Within a few minutes, I heard pounding percussion! I made a second cup of coffee and altered my first 90 minutes of work to research on the deck. The percussion’s battery of snares, quads, and basses were non-melodic entertainment.

When we first moved to Shroyer Road, July 2003, I was in my study one morning, originally on the high school parking lot side, when I thought a semi had blown a tire.

I ran to the front porch, still a bit startled. It was the high school’s marching band percussion warming up, only a few hundred feet away.

One of the best perks living next to the high school is having the marching band in the summer and fall, and often, the winter percussion in the spring.

The metallic beats of the metronome are actually pleasing. I love the marching band energy. It’s exciting.

The next morning, Tuesday, while teaching, I kept an ear to the south for the percussion.

I texted a band mom whose son is in the battery. She said one of the neighbors had complained so the battery was moved to another campus location.

Years ago, the band director often had to visit a retired Air Force VP whose naps were interrupted. There were others.

I’m sorry. If you buy a house next to or near a school, especially a high school, expect noise.

Many band director friends are uneasy about the prospects of a marching band season as the nation moves through this next phase of the pandemic, wondering how or if on-site school will be allowed.

Last night, I learned from a former Indiana student that ISSMA, Indiana State School of Music Association, has cancelled their marching band events and contests for this coming season.

I fear this is just the beginning.

This is not fun.

I’ve grown up with marching band my entire life. Even when my sons were no longer in marching band I was still at most of the area contests.

I feel bad for the students and directors.

I hate this unpleasant scenario for all of us who love marching band.

But it still sucks.