Upon arrival, my former student, Laura Jacobs, and I, attending to see my student, Tommy Cole, and friend, Geoff Burkman, found ourselves joining the cast in audience roles.  Laura played the defendant’s mother, and I momentarily played the role of David Giddinger, Dayton’s (1903) City Superintendent of Buildings, agitated that he was not selected to sit on the jury.

The case, reinvented for the wonderful Old Montgomery Courthouse setting, was: Ohio vs. Charles Stimmel.  Stimmel stood accused of murder and my character, David Giddinger, eager to sit on the jury as he had done for the murder conviction of Albert Frantz in 1896, becomes testy before the court upon his immediate expulsion from the jury, aiming his jeers at defense attorney, John E. Egan, a colorful defense attorney.

The 1903 atmosphere became comfortable and seemingly real as eyewitnesses were grilled on the stand before Judge Alvin Kumler, portrayed by Scott Stoney. The scripted testimonies of eyewitnesses and lines from the prosecution and defense, straight from the very transcripts of the case, were neatly woven into a compact, often humorous yet never wavering from the seriousness of the case, play of nearly three hours.

Our contemporary jury found Charles Stimmel, a tall, lanky lad known in town as “Dayton Slim,” was found not guilty; however, the 1903 jury found Stimmel to be guilty and he was led to the electric chair, “Old Sparky,” on July 22, 1904.

Since the play’s end last night around 10:15 PM, I’ve spent a good deal of time investigating the original players in this case.

” He [Egan] was not a model of personal or professional ethics, had a nose for a fee, and a slight disregard for the clients who retained him. His retentive mind could recite classics at length.  His quick wit, Irish charm, and aggressiveness captured a jury’s attention and seduced or manipulated it for the desired results.  Clarence Darrow tried to get Egan to join him in practice in Chicago.  But Egan was happy in Dayton from Day One, where to the end of his life, he is reputed to have collected his fee at the start of each trial day, walking away from the client mid-trial is the client didn’t pay.”

Stimmel’s female friend, Rose Shafor, though not a presented character in the presentation, played a terrific role through eyewitness accounts.  The real Rose Shafor was actually in jail for contempt of court for refusing to testify in the case.  In the end, it was discovered Rose Shafor was the head of the famous Cook Gang which later evolved into another notorious Miami Valley gang.

An interesting side note: there were two men involved in the Allen & Emmger feed store murder, but only Stimmel supposedly fired the two shots. The much shorter side-kick was never identified, however, later speculation identified Rose Shafor as her boyfriend’s partner, dressed as a man.

The Old Montgomery Courthouse, dedicated in 1850, turned its intended use over to the much larger “new” courthouse in 1884.  The newer structure was torn down years ago and the current Montgomery County Courthouse is several blocks west of what is now known as Courthouse Square. 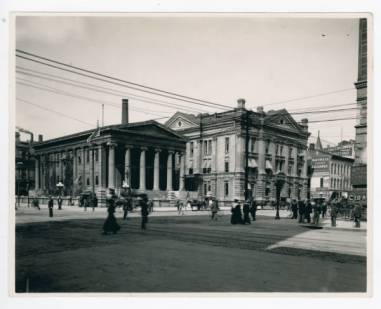 Keep your eyes opened for advertisements of next year’s Dayton Old Case Files presentation at The Old Montgomery County Courthouse.

Interestingly… while this trial was taking place, the Brothers Wright were changing the course of history at Kitty Hawk.