For me, personally, this was an outstanding movie.  I hope to see it, again, next week.

I was about 8 years old when The Pentagon Papers were released and it was when I first became acquainted with The Washington Post, WP’s editor Ben Bradlee and President Nixon.  Later, as Watergate slowly erupted, I became fascinated with Katharine Graham, Bob Woodward, and Carl Bernstein.  I was glued to each interview that featured Mr. Bradlee, Mrs. Graham, Mr. Bernstein, and Mr. Woodward.  I am still glued to any current interview with Woodward and Bernstein.

Streep and Hanks were reincarnations of Graham and Bradlee.

Streep captured the early awkwardness of Mrs. Graham as she navigated her family’s newspaper through the first segment of the national controversy that eventually aided in bringing down the presidency of Richard Nixon.  I read Ms. Graham’s autobiography and never fully grasped the criticalness of her position and the continued heartbreak of her husband’s suicide until Ms. Streep breathed new life into this wonderful character.

I was reluctant in accepting Tom Hanks as Ben Bradlee.  I could not imagine anyone trying to tackle Jason Robard’s portrayal of Bradlee from ALL THE PRESIDENT’S MEN, based on the early 1970s book by Woodward and Bernstein.  I’ve watched the movie countless times; Robards was Bradlee.  Tom Hanks did not disappoint with his own perception of Ben Bradlee. I decided that there was no contest between the two actors; they each brought their very best to bringing Bradlee to life on the big screen.

The opening scenes in the Vietnamese jungles immediately brought to mind the descriptive letters my Uncle Garry sent during his days in Vietnam, some of which had Vietnamese dirt on the pages.

Throughout the movie, I felt as though I was taking a stroll through a 1970s Sears or JC Penney catalog with so many little familiar touches to detail.  I found myself scouring every frame for memorable childhood items.

There were a number of cinematic touches with filming angles I found incredible. They were nothing most would probably find terribly noticeable or exciting, but for me, these touches aided in telling the story with intensity, and even character perspective. Many of these captures seemed to be during moments between Streep and Hanks, enriching the depth of their tremendous working relationship.  One particular scene in Katharine Graham’s home held an angle that made me audibly point it out to my viewing companion, Mark. I know I was guilty of pointing much out to Mark throughout the movie.

Ben Bagdikian on Daniel Ellsberg and the Pentagon Papers

One of my other favorite movies, ARGO, which was also from another memorable historic moment during my youth, seemed to seep through the dramatic intensity as Bradlee and his editing team prepared to go to press while attorneys grappled over the legalities.  My breathing intensified. My fists were clenched. My quiet self-mumbling increased.

In our still-rooted-to-our-seats post-mortem discussion, Mark and I compared some of the current political climate to what we observed in THE POST.  I explained that THE POST has been described as an American political thriller.

The movie spoke to me from the history I witnessed as a child, but even more, it startled me into the newfound awareness that we are currently living through another American political thriller. 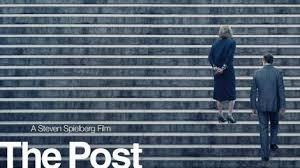