THE FAMILY ALBUM: Along the tracks

I was fortunate to have grown up or to have at least known, all my grandparents, all but one great-grandparent, and only two great-great grandparents.

My mother’s parents always had some of the most interesting and magnificent stories about growing up in central Indiana during the great depression. What remains so rich with me, today is that I never heard them discuss any misery or their struggles. What they did share was the fun times they experienced, but most importantly, the creativity and ingenuity that was required to survive those struggles that we’re never mentioned.

If they never had enough food or missed meals, I never heard about it.

If there wasn’t enough heat to keep warm, I never heard about it.

If they were dressed in less-than-fine or popular clothing, I never heard about it. But I do know they always wore clean and mended clothing.

If they had to work extra hard and miss out on a few things in their childhood, I never heard about it.

I did hear about all the wonderful memories and all the love.

Some Friday nights my great-grandfather, Virgil Barmes, would splurge by bringing home a $.05 gallon of chocolate milk.  This was big news in the neighborhood of 27th and North D streets in Elwood, Indiana.

One story that always fascinated me was The Truck Gang.

Several families with pick-up trucks would get together and pile boys in the back of the trucks.  The caravan of 10-15 trucks would head eastward to Alexandria, a town seven miles away.  At a certain location, the boys would hop out of the trucks and take their places behind trees alongside the railroad tracks while the trucks moved out of the way.

Once the engineer had passed, the boys came from behind the trees and began jumping onto the moving train.  They’d climb from car to car until they found the cars with canned goods, produce, and meat. Food items would fly from the moving train alongside the tracks.

After the caboose passed, the trucks would divide up on each side of the tracks and the remaining boys and men would load up the food items into the backs of the trucks.  Eventually, the teenage train bandits would hop off and begin collecting items. 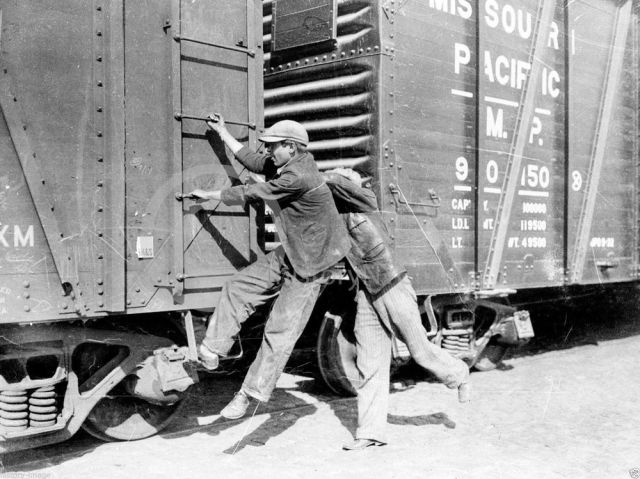 Boys hopping onto a freight train during the Great Depression, circa 1930s.

As a boy, that story was adventurous, even heroic.  As an adult, and a parent, myself, I am somewhat unnerved by the safety hazards, as well as the legality.

Actually, I applaud them for their courage and the risks they took to survive.

This was only one of many wonderful stories I learned about survival.  That generation is mostly gone. Only a few of the great uncles and aunts remain, and two, a great-great uncle and a great-great aunt, survive.  However, their courageous stories of survival during The Great Depression live on.