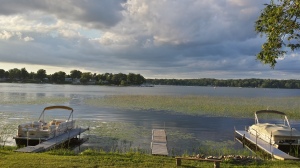 On a cold, snowy day in January 1970, my maternal grandfather and I hopped into his blue and silver Buick Skylark for the two-hour drive north toward Syracuse and North Webster.  We were spending the day ice fishing with Grandpa Leroy’s dad, my great-grandfather, Grandpa Virgil at his Dewart Lake home in Northcentral Indiana.

Grandpa Leroy, until the day he died in 2004, could never resist a joke.  “Well, Daddy sets the boat out on the ice and chops all the way around it until it’s in the water.”

To a child of four, that sounded reasonable.

“No, Honkin,” Grandpa Leroy began with my nickname, “Daddy, I mean, Papaw Virgil, built a house that he pulls out onto the ice.”

My grandfather was a large framed man of strong German stock.  I look at photographs of the Barmes ancestry as far back as the Civil War and it is apparent that the solid build is not abandoning our gene pool anytime soon.

Grandpa Leroy was nearly forty-three years old when I was born, and as we headed to Dewart Lake, it had never occurred to me that I still had a young grandfather at forty-seven.  Forty-nine years later, even Grandpa Virgil, who was in his late 60s was still quite young.

Even at age four, the well-worn trek to Dewart Lake was familiar and I counted the sites as my own milestones: the statue of Lincoln in Wabash, various eateries along the way, and always, the signs bearing the names of the many lakes in lake country I had memorized.

We pulled up to Grandpa Virgil’s lake house where we were greeted by his second wife, Ruth.  My birth great-grandmother, Thelma, Grandpa Leroy’s mother, was killed in a train-automobile accident in January 1953.  I was bundled up in my new navy blue snowmobile suit, ready to brave the cold. In typical fashion, Grandpa Leroy entered the snowy weather without his coat.  I’d grown accustomed to seeing him in short sleeves, even on the coldest days, and I was well into my late 30s before I began seeing him wear a coat during winter months, and even that was generally a windbreaker or a light spring jacket.

We walked the short distance to down to the lake and the most wondrous site lay before me: the huge lake was entirely iced over.  Ice houses dotted the top layer of solidified water and snowmobilers, ice skaters and hockey players made the most of their short winter recreation.  I was dually excited and fearful; the element of fun was greatly overshadowed my tremendous fear of the water.  Even while bathing, or getting my hair washed in the sink if water splashed on my face I became hysterical.

Grandpa Leroy must have sensed my hesitation.  His large hand wiggled its fingers, a sign for me to take his hand.  “It’s ok, Honk.  The ice is very thick.”

Together, we ventured past Granpa Virgil’s pier, held in place by the ice.

It was slick.  My feet were uncertain how to grasp the traction that seemed to continually escape me.  Just as I was getting the hang of the ice, the door to the ice house swung open and the equally large German frame of my great-grandfather appeared.

“Son, now you march right on back to your car and get your coat and gloves.”

I’d never heard Grandpa Virgil use that tone of voice.  Why, he was always rather quiet, but fun-loving, and could hold a crowd hostage with his hilarious storytelling and jokes.

“No. You need your coat. I’ll take Darin’s hand and get him inside.”

It’s been nearly fifty years and I can distinctly remember my grandfather being mildly scolded by his own father!

Grandpa Leroy was slightly miffed but was still, at forty-seven, an obedient son.  He passed me off to Grandpa Virgil and turned back toward the car.

The ice house was also a new adventure.  It was small but unlike many of the single-hole ice houses, Grandpa Virgil’s was longer and known as a “two holer.”  The wooden-frame was Grandpa Virgil’s handiwork and had all the rough amenities to suit the old man: racks to hold fishin’ poles, crates to keep kerosene lanterns which provided both light and heat, from getting knocked over, and hooks for coats.  There was nothing fancy to the interior, but it was Grandpa’s sanctuary, just like his woodshop.

“Let’s just unzip the top half since you’re also in your boots.”

The older man assisted freeing my arms which were quite comfortable in the toasty hut.

“You ready to do some fishin’?”  It was more of a command than a question.  Fishing was serious business with Grandpa Virgil, now a retired farmer and factory worker who’d known the harsh struggles of The Great Depression.

Grandpa Virgil was just as excited to introduce me to this new wonder as I was to experience it.  He knelt down to grab hold of a knob that secured the round wood disc into the floor of the ice house.  He pulled on the knob and lifted the covering.

A pale green light glowed from beneath the floor.  It was a mesmerizing, ethereal glimmer.  I stared into the green light that hardly looked like water at all.

And soon, a small fish wiggled through the water below.  It was much like looking down into my goldfish bowl at home to watch my fish named after Aunt Norma’s three children, Randy, Wally (Gary) and Tanya.

While Grandpa Virgil prepared my pole, Grandpa Leroy, looking less than thrilled to be in his coat, wedged into the small structure.  There were benches on opposite sides of the ice house, each built right next to an accompanying ice hole.  The two older generations took their seats while I sat on a three-legged stool Grandpa Virgil had made the night before for my comfort.  I was not a four-year-old nuisance to the older gentleman, but a line from his own flesh and blood who was to be treated like a child, but a respected child.

I don’t recall what happened when the ice fishing ended.  I am sure we returned to the house for a meal, as that was always a part of each visit.

Like the frozen ice, I have this wonderful memory of spending time with my grandfather, and his own father, fishing, listening to the stories, laughing heartily, and beginning my journey as the bookkeeper for my family’s genealogy and as many of the stories I can set down.

I was not to experience another ice fishing expedition like the one in January 1970.  Grandpa Virgil passed away in his sleep that following September 1970.  Forty-eight years later, the dear man’s humor and practical jokes live on.

I continue to treasure that one fraction of a moment witnessing my great-grandfather semi-scolding his son, my own grandfather, to go back to the car for his winter’s coat.