OF INTEREST: The Chapel

In 1999 I took a three week vacation knowing I’d be starting the adoption process shortly thereafter. I figured this might be one of my last big vacations without children.

The start of this trip, following an attempt to view Niagara Falls (I become nauseated and dizzy, even watching videos), I journeyed on to Stowe, VT to visit the Trapp Family Lodge.

I toured the lodge, played a recorder trio with two of the “real-life” von Trapp daughters, paid my respects at the graves of The Captain and Maria, and decided to climb the side of the mountain to visit the chapel built by the Trapp family.

One of the sisters asked if I’d been up to visit the chapel.

The second child of Georg and Agatha Whitehead von Trapp, Werner Ritter von Trapp, studied cello at the Mozarteum School of Music which would later be used as the front exterior of the Trapp manse in the movie, THE SOUND OF MUSIC. Werner joined the US Army and upon his safe return, built the chapel high above the original family lodge in the quiet solitude of the mountain.

It was raining and chilly. My path was mostly mud, making each step all the more difficult. But for some reason I was determined to visit this chapel. 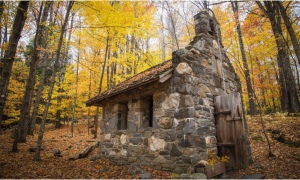 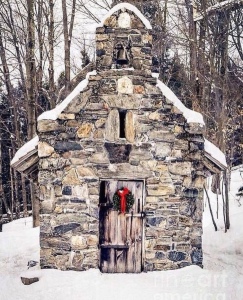 The clouded light was becoming scarce as evening approached but in the cleared ring around the chapel there was light. The rain beat a steady rhythmic pattern through the crowded leaves of trees but in the openness of the chapel’s clearing, no rain fell.

It was a beautiful moment.

I could hear the rain but not feel it.

I could sense the darkening skies but stood in light.

I slid back down, grabbing hold of trees and anything else to steady myself.

It’s been eighteen years since visiting the chapel and I can still feel the rain-free breeze and stream of light.

Some things cannot be explained.

And that’s fine by me.