Since Friday, I have attempted to grab bits and pieces of the three disc DVD of the HBO miniseries, JOHN ADAMS.

I am on the fourth part, and Ambassador Adams just completed his first meeting with King George… I cannot imagine being the first USA ambassador to The Court of St. James immediately following the Revolutionary War! The moment was incredibly intense, yet there was an air of honest sincerity.

The actors portraying Adams, Abigail Adams and Jefferson were superbly cast, and the detail to accuracy throughout the series is much to my liking.

I have always loved the early relationship between John & Abigail Adams, and Thomas Jefferson. They were dear friends, and the movie captured their devotion, humor, and intimacy beautifully during their time together in Paris.

It is a very touching moment watching President Washington’s inauguration on this Memorial Day. How far we have come since that day in April.

I am so enjoying this miniseries, which I am finding quite remarkable. 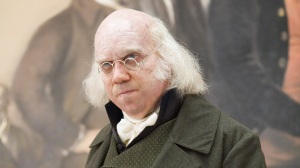