2008 Marching Season comes to an end…

It is 10:55pm and we are home from a semi-cold, blustery day on the marching field.

Yesterday, we had no marching band or other commitments. Jose and I did the traditional end-of-marching-season dinner – he chose Golden Corral (not my choice), and then we went to the mall so he could go to Game Stop. I chatted with Mother on the phone while he shopped. Afterward, we went to Buy Backs – a neat place to purchase used DVD’s or CD’s.

Jose went to a Haunted Cave in Lewisburg, Ohio with his youth group, and I worked at home.

This morning I lounged in bed with my laptop, and finally rose to fix an delicious egg white omelet. I showered and drove to UD’s Welcome Stadium to watch several of my drum-majors in their last performance on a marching field.

I drove to Meijer for a few items, grabbed some sandwiches from Rally’s, and hurried home with ten minutes to spare before Jose had to be at the high school.  I also jotted down a few notes for the Fairmont band director, informing him of some of the difficulties other bands were having with the very strong wind – rifle and flag tosses not landing where expected, hats and plumes blowing off, guard skirts providing Marilyn Monroe moments, and props collapsing on the field.

After Jose left, I framed and hung a neat print – signed by the artist, Paul Melia. The print, a wonderful gift from the Salchak family, is MANNDED FLIGHT – 100. It features the Wright Flyer, both Wright Brothers and about 30 planes, along with the stealth bomber. It proudly hangs in my study.

I also put plastic up to the windows in my bedroom and study. Tomorrow I will grab Jose’s room since the western windows receive a good deal of wind. Already tonight, with the great wind, they have already paid off.

At 7:00pm, Jill Chabut picked me up and we had a great chat en route to Welcome Stadium. The wind had died down, but the dark clouds hung in the sky threatening a down pour – and our theme was CLOUDBURST! Fortunately, we had no natural special effects.

The band was wonderful and received a Superior (I) rating. A wonderful way to end the season.

Jill and I had another great chat about spirituality on the way home. She is such a neat spirit, and I enjoy my time with her. Jill is also Jose’s youth leader, and he loves being with Jill and her children, Ali and Neil. Ali is in band with Jose, and Neil was one of the percussion instructors for marching band. 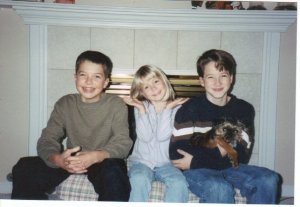 The Chabut children (Craig, Ali, Neil) when I met them in 1996; and the Chabut children (Neil, Ali, Craig) today. Neil is at UD, and also works with the high school marching percussion; Ali is a junior, and is in band; and Craig is at Ball State. Some of the nicest kids you could ever meet!

The band unloaded the truck, and everything was put away. Since it was late, there was no party as last year. It was somewhat odd not having some closure.

Tuesday night is the band concert and the grand finale is the marching band plowing down the aisles with the fight song. They assemble on stage and play the show one last time. So, I will have one more opportunity to hear Jose’s “ding.”

Jose & the “ding” heard round the world!