The day began with dampness since the early morning rain was more of a drizzle without soaking much.

Still, it was wet enough that I took breakfast at my desk and caught up on some reading for a few hours.

Before I knew it, it was 11:00 AM and the newfound sunshine beckoned me to the deck. It was a pleasant, mild day and the breeze on the deck this evening has been delightful.

For about two hours I busiest myself with items in the house, in the study, and on the deck while four pooches closely followed me, probably wishing me to idle in one spot after getting comfortable with each move.

Erma left the deck for her bed around 8:30 PM. She was later followed by Chief and Harrigan. Bailey has slept by my Adirondack chair the entire time. 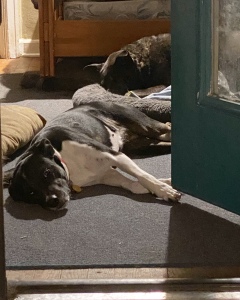 Harrigan, Erma, and Chief (out of camera range) already hunkered down for the night

It’s about time to head inside. I’m beginning to fall into that state of drifting but this comfortable evening has glued me to the chair. I may return to the deck later.