MY DAY: A heart full of love

This has been a fantastic week of surprises and other wonderful things happening.

A former student returning to college gives me an artistic gift with a witty reminder of my JOSEPH years, a former student’s mom and friend gives me a stein with aviation carvings, and my sister and her family spent a few hours, here in Dayton today, bringing me this beautiful wall hanging to remember our mother who died one year ago tomorrow, August 5, 2019. 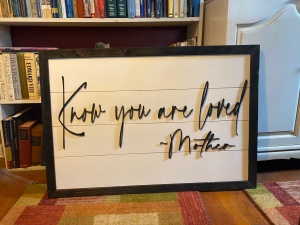 My sister, Dena, is 8 1/2 years younger than me. We did not really grow up together because by the time she was at school-age, I was already   in junior high and high school. However, it never hampered our closeness and unbounded humor.

Mama Kay came over to visit with us, bringing several plates of treats, and we had the absolute best time laughing. (Imagine that!)

Although we’re coming up on our first anniversary of being without Mother for a year, it certainly was not a sad visit by any means.  

Today is also the one year anniversary of the horrendous mass shooting in the Oregon District of downtown Dayton. Despite having a close friend whose son was one of the surviving victims, I still feel quite removed from the event. I was returning to Dayton from Indiana when I learned of the shooting. Still, the haze of my mind at that moment compartmentalized the event and it was pushed aside.    

By late Sunday afternoon, August 4th, I was hurrying back to Indiana to be at Mother’s side, along with my sister, as we waited those next several hours for the final breath.  As the Oregon District shootings played out across all the major networks it still seemed far off in the distance, perhaps another country.

The anniversaries of the mass shooting in Dayton and the anniversary of Mother’s passing, only 23 hours apart, appear to have born a rainbow of hope and a page turning from a year long chapter that dragged out  with the full range of emotions.

Regardless, love is always present as it ebbs and flows, sometimes very strong, sometimes practically invisible.

But, it’s always there.

It’s a blessing to have this heart full of love.