O, FOR THE LOVE OF HISTORY: Watervliet Shaker Building

While strolling the grounds of Dayton’s Carillon Historical Park, I happened to run into Brady Kress, President/CEO of this venue, and inquired about this structure.

What a fantastic history lesson!

The Shakers came to America from England in 1774. A communal religious sect, they established 19 villages in the United States, for of which were in Ohio. A sect of Shakers from Watervliet, New York, settled east of Dayton near Watervliet and Shakertown roads.

The Watervliet Shakers ran a print shop, woolen mill and gristmill. They sold their goods at the market in downtown Dayton.

Shakers were known for their furniture making and for being the first to sell garden seeds in paper packets.

This building reflects the Shaker simplicity and design. Their sense of order and neatness is reflected in the clean lines and lack of ornamentation in their architecture, furniture, baskets, and other craft work.

This structure was built around 1819 in eastern Van Buren Township, now the City of Kettering

The structure was the print shop of Richard McNemar which was the center of Shaker printing. He printed the second Shaker hymnal ever published, as well as numerous tracks and pamphlets.

Thank you, Brady for that most excellent and fascinating history lesson. 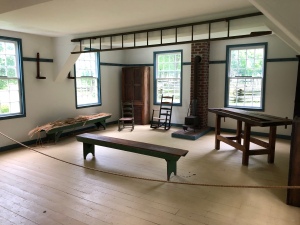