MY DAY: A boy’s journey to find a smile

“He’s been placed on suicide watch because he said he would kill himself if he didn’t get a real family and had to go into a group home.”

It didn’t sound promising as I inquired about the young Navajo Indian boy. He would be under close surveillance for two months.

By early December, we were flying out to meet him.

I cautioned the others that he was quiet and very reserved, and that we’d probably need to back off our typical overwhelming humor and jokes.

We were waiting at the Red Mountain Family Services north of Albuquerque chatting with the director and his counselors when he burst through the door, grabbing us with fierce hugs.

His foster family finally stepped out onto the patio to greet us and said the car had not even come to a complete stop when he bounded out toward the building, rushing through the halls, looking into rooms with “where are they?”

Our first meal together, at Wendy’s, in honor of founder Dave Thomas, was a tradition with each new son. This was my fourth first meal with a new son.

It was not a get to know you meal, but rather a typical family sitting down together for dinner.

“Are you sure we got the right kid? He doesn’t seem depressed?” asked one son.

We stopped at Walmart to buy breakfast foods and snacks. The older sons were accustomed to me tossing things to them for a fake slam-dunk into the shopping cart.

The boy who’d sat through 13 months of therapy, barely talking, or crying himself to sleep in his foster home, had come to the end of his journey without a family.

Several months later, I took #3 and #4 to Hills and Dales Park to take photos. It took 45 minutes to get one serious photo.

They made me smile. 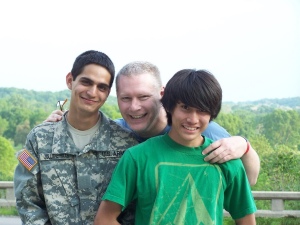