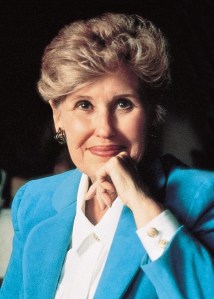 When I moved to Dayton, Ohio, August 1990, I was excited that I lived in the same town in which novelist and humorist, Erma Bombeck, grew up.

Wright Brothers? (Yeh… I knew who they were… big whoop!)

Martin Sheen? (when WEST WING came out, I became a fan)

Dorothy Gish? (Yeh, I knew who she was)

This list could go on until Yoko Ono is the operatic lead at The Met!

Erma Bombeck was a hero to me and the only important Daytonian as far as I was concerned.

Mother took me to our local public library in our small town of Elwood, Indiana.  I went downstairs to the children’s library while Mother looked at books upstairs.  I had read through all the history biographies and everything of interest to me and could not wait until I was old enough to begin reading the really cool things upstairs in the adult library.

I hurried upstairs with my checked out books and joined Mother who was holding two books by Erma Bombeck, JUST WAIT UNTIL YOU HAVE CHILDREN OF YOUR OWN, and her newly 1974 published, I LOST EVERYTHING IN THE POSTNATAL DEPRESSION.  Mrs. Stiner, the librarian, and an old family friend was chatting with Mother about the book and how funny Erma Bombeck was.

After a few days, Mother had finished one of the Bombeck books and I asked if I could read it.

“There’s some humor you might not understand as a fourth grader but, I think you’ll get most of it,” said Mother handing me the book.

Within a few days, I was asking to read the other book.

“I didn’t know moms could be so funny!” I said, accepting the next book from my mother.

Mother located Ms. Bombeck’s AT WIT’S END written in the late 1960s. I began reading her syndicated column in our newspaper and trying to find anything she wrote.

Before long, I began watching her on GOOD MORNING AMERICA before heading off to school. A year or so later her next book, THE GRASS IS ALWAYS GREENER OVER THE SEPTIC TANK, was published.

For the next twenty years, 1976-1996, I read every Erma Bombeck book, watched her on every television interview of which I was aware, and loved meeting Dayton folks who had known her as a neighbor or in general.

One of my students had their graduation party at her grandparents’ home on Cushwa Drive in Centerville, Ohio; they had been neighbors with Bill & Erma Bombeck and talk show host, Phil Donahue.  I spent a good deal of time walking back and forth, stalking the former Bombeck home (they had moved to Arizona in the 1970s).  It was like standing in The Church of the Nativity in Bethlehem, the Church of the Holy Sepulchre in Jerusalem, or one of President Lincoln’s home.

Ironically, the home has been recognized as a historic place!  Bombeck Home

I still get a little excited each time I see the Centerville street sign, Cushwa Drive.

I was in Manhattan on a Monday morning, April 22, 1996.  I breakfasted, late, with several friends at Popover Cafe on Amsterdam Avenue before heading off to the 10:00 AM meeting site where I was assisting two writers on the sagging book of their musical, passing through Times Square.

I was accustomed to seeing folks standing about, reading the familiar news ticker, but I had long abandoned my own interest in the sidewalk pass-time.  For some reason that morning, I glanced up as I strolled by.

I felt as though I’d stepped in cement-quicksand and was being pulled downward. I felt sick to my stomach, and some vertigo set in.  Within a minute, or so, I had regained my composure and hurried along to my meeting.

“I just cannot believe she is gone. I loved her work so much,” I heard one of the co-writers say as I entered the working space.

I was relieved I had a few minutes to digest Ms. Bombeck’s death with others before settling down to work.

Later that afternoon I spent several hours in a corner of the 5th Avenue Barnes & Noble store reading several Bombeck classics. I left with seven books that became increasingly heavy as I walked 1.9 miles (about 40 minutes in rush-hour foot traffic) to my apartment at East 76th and Third Avenue.

The remainder of the evening I read through her books, laughing, crying, but realizing how grateful I was to still have the work of this wonderful writer.

Ms. Bombeck was buried near the entrance to Dayton’s Woodland Historic Cemetery and Arboretum where other Dayton notables are buried: The Wright Brothers, Paul Laurence Dunbar, Charles Kettering, James Cox, and many more.

A boulder from her Arizona home was transported to the cemetery and only a fraction of it is seen above ground.  Ms. Bombeck loved to sit on this rock to do some writing.

Sometimes, I sit on this rock to write.

Ahhh… forty-four years ago I was introduced to this wonderful writer, Erma Bombeck.

I still love this lady. 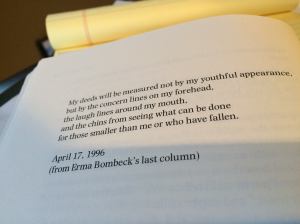