The current generation may not recognize her name, nor know her body of work, but Bea Benedaret was a familiar face and voice throughout my early youth.

Before falling asleep last night I discovered THE BEVERLY HILLBILLIES was on a channel with several successive episodes. I always loved Cousin Pearl’s visits from Tennessee. They were even more hilarious if she was accompanied by Jethro’s (Max Baer, Jr) sister, Jethrene, also played by Max Baer, Jr. 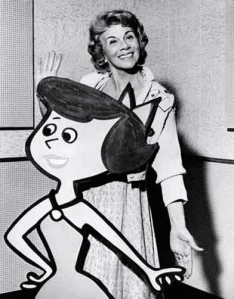 Ms. Benedaret had an impressive career. I knew her as the voice of Wilma Flintstone, also adding her ascending giggle to Betty Ruble. I remember the theme song to PETTYCOAT JUNCTION more than I remember the show, itself, in which she played Kate. 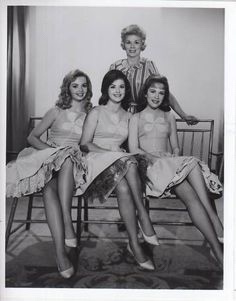 It was neat to see the crossbreeding of three television programs, THE BEVERLY HILLBILLIES, PETTICOAT JUNCTION and GREEN ACRES. the crossover of characters from each of these shows was pretty amazing. Many spinoffs simply ignore their origins.

As I got into my early thirties I discovered Burns & Allen, and became smitten with Gracie Allen. In the Burns & Allen television show, Benedaret played Blanche Morton, Gracie’s best friend and neighbor.

I also learned that Benedaret was Lucille Ball’s first choice for Ethel Mertz In I LOVE LUCY; however, Ms. Benedaret was under contract elsewhere.

Her voice is unforgettable, sometimes even grating, but Bea Benedaret was certainly a qualified comedienne on the screen, both seen and heard.