It’s not so bad when anniversaries are remembered at ten years, even twenty years.

We were definitely snowed in at 825 Main Street in Elwood, Indiana.

My grandmother, Donna Barmes, was escorted on a police officer’s snowmobile from her job at Essex Wire on the far east side of town to our house on the far west side of town. She was to spend four days with us.

Grandpa Leroy was snowed in out at the farm, thirteen miles from our house. 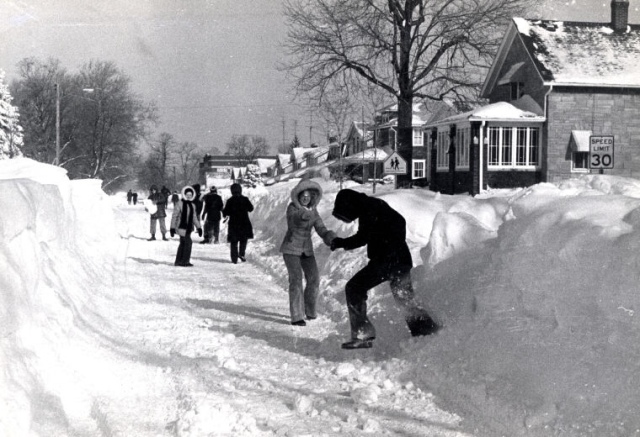 It didn’t seem so bad as the first wave hit so we ventured out to Pizza Hut on North Anderson Street and discovered we weren’t the only ones getting a jump on our cabin fever. It wasn’t long before a police officer showed up to let us know they’d completed a wellness check at our house because Grandpa Leroy had been calling the house to check on us. If you knew my grandfather, this so hilarious and so ‘Grandpa.’

Back home, we continued watching the conditions worsen.

Elwood’s school superintendent, Keith Scott, was legendary for not canceling school even when every other community was off for bad weather. Elwood students trudged on through deep snows and frigid temperatures.

Finally, Elwood schools were cancelled. I believe we were out three days.

We lived at the corner of Ninth and Main streets on a huge hill, one of the highest in town except for those in the southern areas near the golf course and country club. It was perfect for sledding.

The snow began drifting straight out from the crest and was too dangerous for playing for fear we’d drop down through the snow and suffocate.

After several days, Grandpa Leroy had his mile long road plowed with the drifts ten to fifteen feet high in places. He then began making the rounds to check on all family, friends and church shut-ins.

For us kids, this was a wintry amusement park. These were the days when we were still sledding behind automobiles and the minute we could head out to the farm, my cousins, friends and I were sledding behind Grandpa’s brown truck and other automobiles for hours. Grandma kept hot chocolate pouring and the clothes dryer running as we exchanged our frozen clothing and gloves for dryer ones.

The situation was grave but for many of us kids, it definitely was a winter wonderland.