Irving Berlin’s popularity resurfaces every Christmas due to abundant viewings of WHITE CHRISTMAS and the movie, and its songs have become nostalgia even for younger folks. 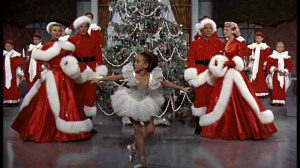 “White Christmas” heads the list, but with my students, the female students pair up to sing the popular duet, “Sisters,” while the guys enjoy, “Oh, Gee, I Wish I Was Back In The Army.”  “The Best Things Happen While You’re Dancing” seemed to be a very popular song this season.

The past few days I’ve seen bits and pieces of WHITE CHRISTMAS, and last night, before falling asleep, I watched the original movie trailer for ANNIE GET YOUR GUN (not directed by Joshua Logan).

Joshua Logan directed the Broadway musicals ANNIE GET YOUR GUN and MR. PRESIDENT for which Irving Berlin wrote the music.

Make it a great day, Folks!