Irving Berlin’s “There’s No Business Like Show Business” from ANNIE GET YOUR GUN. 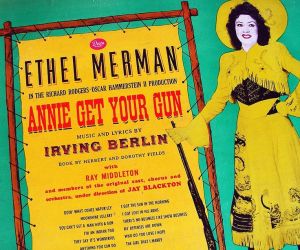 Today I received two invitations to see local (within a 50-mile radius of Dayton) productions.  They each begin this Friday.

Really?  This Friday and it’s the first I have heard of either?  Grant it, I don’t stalk their Facebook pages or websites for information but I do have notifications set to know what’s on their schedules. I even did some research and I could not locate any previous marketing notices for either production.

Are the productions so poor they do not wish for anyone but family and close friends to attend?  These companies generally produce quality work.

Is someone just getting around to marketing?  Ahh… yes.  So it seems.

It has to be more than hanging posters in your local dry cleaners or supermarket; those items sometimes get lost in the clutter of those walls or the clutter in our oft hectic lives.

Tell me about the production and I probably won’t remember.

Social media has taken on a new stage for production marketing.  However, if organizations are going to utilize social media they must be clever, consistent and communicative.  A group cannot and MUST not expect everyone associated with them or any of their members to quickly zero in on the information.

I hate playing Sherlock Holmes when I do go to sites.  Why did I spend 11 minutes of my time searching for the time of the show the night I am attending?  The other day I was a bit put off by The Miami Valley’s leading performance venue, The Schuster Center and Victoria Theatre taking me on an excursion to simply buy tickets for a currently running production.  I was so close to saying, “screw it, I will just not go,” but I attended a preview of this new production and really want to see it.

I am fairly adept at working my way around these things, but I shouldn’t have to work so hard to locate information about auditions or productions.  And there are folks out there less comfortable with technology.

I see poor marketing information and strategy all the time from many performing arts organizations, mostly non-professional, school and churches:

Make a marketing strategy and make certain the PR/Marketing directing/team captain is on top of social media one person is handling social media from the group’s social media headquarters with all information. Be creative. Grab your readers. Let Johnny post his Instagram photo of himself in costume with, “Hey goobers. I am in this show so come see it.” Johnny will get some goobers in to see the show.  But be sure Johnny is not the head of the marketing strategy!

When I see packets/marketing leaving out essential details, I promptly dismiss the upcoming audition or production.  If the company manager, producer, whoever have not taken the time to market and plan appropriately I am not comfortable investing my money into a ticket.

And it is not just about leaving out pertinent details.

My son was interested in auditioning for a local production of one of my favorite musicals.  I needed to find the performance dates since he is committed to another production.  I searched the site.  I researched the site. The third time of reading through the information I found the following:  Please bring a list of ALL conflicts from September 20 through November 12. The show runs November 3-12. Please contact…

The performance dates were freaking wedged into the least conspicuous spot, an area my scrolling eyes missed several times.  Why not this:

Performances: Date(s), Time, Location with other information where to obtain tickets

Prospective customers should never resort to speaking like Basil Rathbone in a 1930’s Sherlock Holmes movie as they search for vital information, NOT clues.

I always chuckle at the lyrics to Irving Berlin’s well-known anthem;  it’s always about the ooy-gooy side of stage life.   There’s a business to preparing a character or rehearsing (if it is done correctly and with the organization), but the show business is something entirely different.  It’s the foundation of the production, the company.

I worked with a local production company that had done well for many years as a mom and pop company until it had to change location.  It soon became evident that it could no longer continue to operate as the neighborhood lemonade stand.  I, along with several others, was brought on board to help aim the company in a new direction.

In the end, those who had been with the company for many years could not let go of “this is how we always did it and it worked then.”  But, it was not working in the now, the new location.  Those of us who’d been brought aboard as the transition team watched it fold within a year or two with the charter members clinging to the cliff as the company toppled down the hill.  But for the several years charter members were practicing GREAT show business we enjoyed some magnificent productions and tender memories.

Think of the pyramid… build the foundation with excellent business practices, then be certain your production team is organized and committed to the plan of thinking like a business while still being creative; the little tiny tip is the actual show – which is a different pyramid later.

There seem to be a lot of Phoenix rising from the ashes of dismantled production companies and sadly, without a thorough appraisal of what preceded the new attempt.  Without firm, courageous leadership stressing and following through with valued business practices there’s probably going to be more smoldering.

There’s no business like show business and it will make for even better productions!