MY DAY: Forks in the road

I’ve had an incredible journey these past 51 years. It’s been exciting, sometimes sad, thrilling, sometimes painful, but it’s always been filled with great joy, and tons of laughter.

Three years ago, I began the journey through my empty nest chapter. Many of my friends who had entered this phase of life before me, lamented having their children out of the house.

I, however, welcomed it.

I had adopted 12-year-old boys with incredible issues, tremendous loads of anger, depression, and a closet full of PTSD.  I got the job done, but I was very tired at the end.

The past three years, I battled PTSD. I’ve come to recognize the fact that many adoptive parents experience the same.  One of my current missions is to make this PTSD factor with adoptive parents more widely known.

This past year has been extremely refreshing. I made an incredible amount of changes in my life, in my home, and in my career.

The house was rearranged, and many unused, unneeded items were either given away, or hauled away. I also cleared away a number of toxic individuals, both friends, and a number of students who were behaving improperly in their music classrooms at school, adopting unattractive attitudes, or bullying other students.

I took complete charge of my life, and cheered myself on to new growth. I had created a very comfortable life, and was beginning to explore new things in my world, and beyond.

Nearly one month ago, I recognized my journey’s path was approaching a fork in the road.  One section of the fork was the pathway I had envisioned, and joyfully created. The other section of the fork involved a 17-year-old student whose newly adoptive had to come to the realization that the responsibilities involved with raising a teenager fresh out of the system, was extremely taxing. And, it is a demand on one’s body, mind, and soul.

Never being one to truly slow down, I charged ahead, fully aware a decision needed to be made.

Would I remain on this new, and exciting road I had paved for my journey, or would I assume the frustrating role of my GPS, and reroute?

There was no question. I’ve rerouted my journey.

Somtimes, we just need to shut down the GPS before it announces, “rerouting.”

We’ve already taken the other side of the fork. 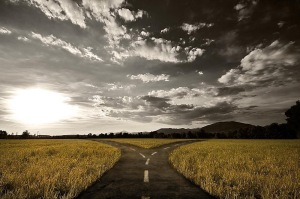