“If no one responds to the ad in the paper, you can keep him.”

I am sure I was not the only boy in the country to hear those words from his mother.  I heard those words in September 1970.

My description of the meeting was that the dog was at Burger’s Dairy Store after school, and followed me home. 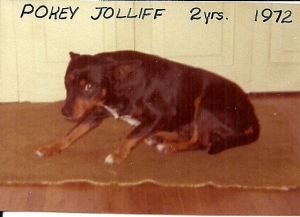 I did find the discarded puppy on the raised slab of concrete leading into the store, right next to the soda vending machines.  The little Manchester dog looked up, wagged his tail excitedly, and somehow, wiggled into my arms.  I carried him down the block, carefully setting him down at the tall hedge that separated our yard from Dick & Betsy Herndon’s yard.  Fortunately, he followed me to the long, stone steps that led up to our wrap-around porch on the top of the big hill at Ninth & Main streets.

No one claimed the dog, and he became a semi-permanent fixture in our home.

In 1970, one of my good friends was Debbie Poynter, a neighbor, and a fellow kindergarten student at the nearby Washington Elementary School.  Debbie’s nickname was “Pokey.”  According to her older sister, Julie, the nickname was bestowed on Debbie because she was so “pokey” while feeding as a baby.

So, in honor of Debbie (my grandfather also nicknamed her, “John”), I named this new dog, Pokey. 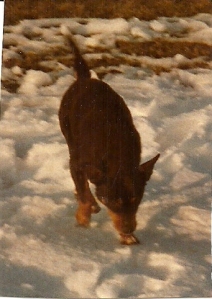 bed… gathered up my belongings when I was away for the day… chewed up one of Mother’s shoes and gloves… chewed the feet off of one of my action figures from Johnny West’s Best of the West… and the best, was always so happy to see me.

Due to several vicious attacks by a neighbor’s German Shepherd, Pokey became fearful, and anxious.  the scars on his neck healed, but he nipped, and even bit at strangers.  My grandfather could not bear seeing Pokey chained up in our backyard, and asked if he could keep Pokey out at the farm.

The last ten years at Grandpa & Grandma’s were truly wonderful years for Pokey.  I don’t believe any dog had a more spacious, warmer dog house with loads of installation installed for the winter months.

Every weekend we ventured the thirteen miles South of Elwood to my grandparents’ home, we were always excitedly greeted by Pokey who still followed me about.

In 1982, I had not seen Pokey in months due to marching band.  Grandpa told me Pokey had really slowed down, and was having difficultly getting around. It had gotten to the point that they had to set Pokey down off the porch for his potty-breaks; he was too infirm to walk down the steps. 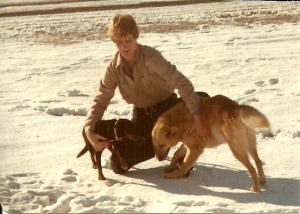 Thanksgiving morning, we arrived for dinner at my grandparents’ house, and Pokey recognized the car. With great effort, and tremendous difficulty, Pokey rose, walked down the three steps, and met me in the middle of the driveway.  He was still the ever devoted companion, and still excited to see me.

Christmas morning was a repeat – Pokey rose to greet me in the driveway.

That was the last I saw my wonderful pal.  The next month, Grandma Donna found him in the garage.  Her dog, Duchess, was laying with her paws wrapped around Pokey, and crying.

It’s been thirty years since my little Pal died, and since then, I have been blessed with three other wonderful pals – Flyer, Chief and Navi.  Still, I will always remember Pokey’s companionship, and his constant devotion, so often echoed by Flyer’s own devotion – and more so, that of Navi and Chief.

NOTE:  I could not tell the Story of Pokey without including this tidbit which has become legend in our family stories.  I was in the high school musical, OKLAHOMA! when Pokey died. Mother decided it best not to tell me of Pokey’s passing until after the musical closed that weekend. I hurried home for supper that evening before returning to the high school. While eating, my brother, ten years younger, and I got into a squabble. His final thrust was, “Your dog’s dead! Grandma found him in the garage this morning. He’s dead.”  I looked with horror to my mother for confirmation. She nodded. I can still remember the shock, but even more so, the look on Mother’s face that alternated between 1) sympathy for me, 2) aggravation with Destin for spilling the beans, and 3) biting her lip to keep from chuckling. 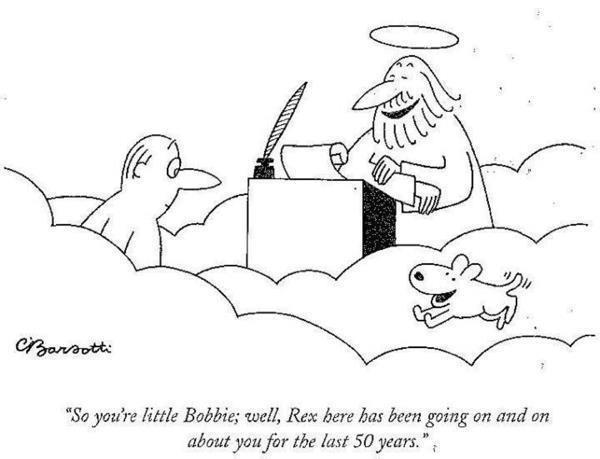 Darin is a single adoptive father, a teacher, playwright, and musical theatre director from Kettering, Ohio.
View all posts by Wright Flyer Guy →
This entry was posted in Elwood, Indiana, Every day life, The Haasienda. Bookmark the permalink.

2 Responses to Pokey… a fine dog!