Grandpa loved nothing more than to make people laugh.  In fact, it was his gift to us.  Of course, it goes without saying that he had an element of performance that often made him the center of attention and I’ve always said that Grandpa liked to be the bride at every wedding, the corpse at every funeral and the baby at every christening.

Sometimes, he was simply larger than life.

By the time I was able to walk and talk as a toddler I was Papaw Leroy’s little companion. It seemed as though I went everywhere with Grandpa, and one of my greatest joys was riding in the police car with him. I loved spending time with him, and remember him whistling, playing his harmonica, or humming “The Whiffenpoof Song.”

One day, after my Grandma Donna had taken me to watch the Panter Band practice at the old T-Way parking lot for the Indiana State Fair contest, I was marching around their front porch with a pretend trumpet. Grandpa asked, “Are you honkin’?” At the age of three I suppose I thought I meant “is your name ‘Honkin'”? So, when asked my name, I replied, “Darin Honkin’ Jolliff.”

Thus, Grandpa dubbed me with the nickname, “Honkin’” or simply, “Honk.”  He was the only one who ever called me, this and most of my cards, or letters, for nearly forty years were addressed to “Honkin’.

One of my earliest memories of my grandfather is not one most grandchildren would have.  We were having a church picnic out at Elwood’s Calloway Park and I, at age three, climbed to the top of a twenty foot slide.  For whatever reason, I looked over the side and lost my balance.  To this day, I can still clearly remember falling head first and seeing the ground begin to blur into a mass of solid green.  The image of my forty-six year old grandfather running towards me with outstretched arms is forever etched in my mind.  Grandpa caught me that afternoon.

As a young boy, Grandpa convinced me he had grown up with Abraham Lincoln. At Lincoln’s Indiana boyhood home, he pointed out a section of split rails that formed a fence, “Now, me and Abe chopped all those rails.”

I learned how Grandpa taught Lincoln how to play football, what good cooks Nancy Hanks and Mary Todd Lincoln were, how Grandpa assisted Lincoln with radio transmissions during the Civil War to follow Confederate lines, and how he and Grandma helped babysit the Lincoln sons. The history books have never described how the Lincoln funeral train was rerouted from Indianapolis through Elwood because Grandpa Leroy could not get off work from the police department.

In 1975, I entered the 5th grade at Washington Elementary School, and my teacher was the oft acerbic, yet terribly witty, Garnetta Brugger who had taught Mother and my uncles and cousins. On the first day of class, Mrs. Brugger was taking attendance and sharing tidbits about each student she knew. When she got to me, she explained to the class that she had taught my mother, and that she had known my grandparents since they were young. I was excited, and burst out with, “Oh, so you knew Abraham Lincoln, too!”

Mrs. Brugger, who could be quite intimidating, threw back her head as though struck with a blunt object, and grabbed her hair. “Honey child, I might look old, but I am not THAT old. Your grandday’s been telling you some whoppers.”

That evening, I looked in our encyclopedia. President Lincoln had died in 1865. Grandpa Leroy was born in 1921! 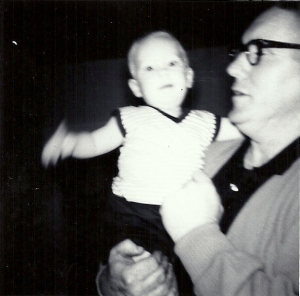 One huge cookie jar contained clippings regarding the tragic loss of his uncle, Glenard Daugherty who was killed on Iwo Jima in 1945, obituaries of his Grandpa and Grandma Daugherty, his own new job at the Elwood Police Department in 1952, birth announcements of my mother, Diana, and uncles, Ron and Tommy, engagement and wedding announcements of his nieces, Judy and Jan Smith, a TV Guide page with a photograph of his cousin, Steve Daugherty announcing his new talk show on channel 13, an article of his cousin Stan Daugherty’s appointment as Elwood’s head basketball coach in 1980, and countless clippings about athletic or personal successes of family, neighbors and church friends.  Even in his 80’s and as his health began to decline, he still maintained this last jar of clippings.

These jars were not filled with yellowed, crumbling keepsakes.  These clippings were his gifts to us, reminding each of us the importance of family, and friends.  These clippings symbolize our family’s rich heritage throughout the years.  They encouraged us to never quit until we have crossed the finish line, to urge his children, grandchildren, great-grandchildren, nieces, nephews and cousins – all of us who follow his generation – to stay connected to one another and to always keep our family together.

But above all, those clippings were gifts to never let us forget just how dearly Leroy Barmes loved and cherished his family and friends. 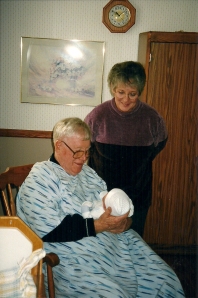 Six years ago I bid farewell to not only my grandfather, but to the man who stepped in to fill the role of “substitute dad” when our natural father abandoned us early in life.  Grandpa was the one who taught each of us how to throw, field and bat baseballs, and how to do so many of the other things that only a dad can truly teach his young children.  He, along with our mother, and our Grandma Donna, insisted that we do our best, always, and to rise above each and every adversity that attempted to barricade our lives.

Not only was Grandpa a roll model as a father figure, he was a roll model as an uncle.  I was blessed with wonderful uncles in Ron and Tom (and my Uncle Gary Jolliff), as well as our great uncles and even great-great-uncles, but I was very fortunate to observe Grandpa as “Uncle Roggie” or “Uncle Leroy.”  I hope that one day, my own niece and nephews will think of me with the adoration summed up by my cousin, Tanya, when she wrote her fondest memory of her Uncle Roggie, “He’s my uncle.  What more is there?”

All through my school years Grandpa never missed school programs, music concerts, marching band contests, college choir concerts, University Singers Spectaculars – no matter how far away from home.  Even as an adult, the year before he passed away, he was sitting in the front row at the Elwood Variety Show when I was invited back to perform. Later that fall he was up in the bleachers to watch my brother, Destin, coach his football team in a game against the Tipton Blue Devils.

Six years ago, with heartfelt gratitude and deep affection, and a treasury of many wonderful memories, I concluded a chapter in a tremendous book that is far from being finished.

For the past six years, I’ve not been addressed as “Honkin’.” And it is only fitting that the former nickname has been laid aside. Despite the fact that Grandpa had died, I knew, even then, that he would always be with me… and with me he has been. My humor, passion for living, love of being a father and uncle, and love for God are all remnants of my beloved grandfather.

“Auf wiedersehn” – “until we meet again.”